Muhammad’s Kitchen is one of our key projects at World Appeal.

The  aim of Muhammad’s Kitchen is to ensure that no one sleeps hungry at night regardless of their colour, race, gender or religion in accordance with the teachings of our beloved prophet Muhammad (PBUH).

“It is reported in a hadith that Prophet Muhammad said,“Feed the hungry, visit the sick, and set free the captives. [Bukhari].

Islam advocates feeding the hungry, regardless of race, religion or background The Prophet Muhammad pbuh said a person is not really a Muslim if he goes to bed satiated while his neighbour goes hungry. Please support our cause and help us provide continued service in
providing food and Water to the hungry locally and around the world.

Food poverty is a significant global challenge that has become an increasingly important national and domestic policy concern.

For example, in our locality, Luton is one of the named homelessness blackspots where shocking statistics reveal that it has over twice the number of people living on the streets than any other town in the East of England, according to homeless charity Shelter.

The study by the charity finds that Luton has 3,458 people living homeless in the borough, which equates to just 1 in 65 people.

In the UK, the rise of the use of Food Banks and people accessing support for essential food items has been a growing concern for over a decade.

You can help the Muhammad’s Kitchen through your generous donations in cash or kind. Private support by generous benefactors can change the plight of the neediest in society, click here to donate now.

You can help the Muhammad’s Kitchen by offering your time, skills or by fundraising for
us. Pro bono services are a great way to help the charity amplify its assistance to beneficiaries.

You can help the Muhammad’s Kitchen through partnership, supporting us to increase our reach and impact, and to create systems change dealing effectively with the root causes of poverty and inequality.

Austerity and structural policy changes such as benefit sanctions have left people struggling to make ends meet World Appeal is a committed to tackling food inequality through the provision of hot and cold meals by supporting Food Bank collections and soup kitchens to ensure those struggling do not go hungry. 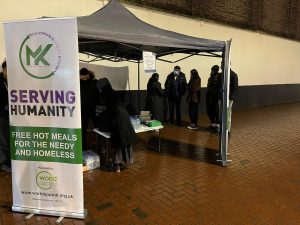